this blog is about to relocate. meanwhile, garden photos.

we're migrating the SR livejournal over to wordpress. i don't have it ready enough to post the address yet, but you are hereby warned! in the next month or so, we will move this journal. LJ is just too ad-ridden and spammy these days, and no longer the community hot-spot that it was four years ago when it made sense to blog here as a community. i'm keeping my personal LJ, this one, but

sunflowerriver is on the move. not this week, but soon. as it will be a wordpress blog, it will be easier to read from an RSS reader.

there's a bunch of stuff over there that i did not post here just now. i believe you can add flickr updates to your RSS, those of you that use those. i'll continue to make photo posts for SR, on the new site, and then link them back here and on facebook, as soon as we get it moved. Flickr is getting regular updates meanwhile, as i photograph stuff. if you're on flickr, feel free to add us!


for today: radiance in the garden. 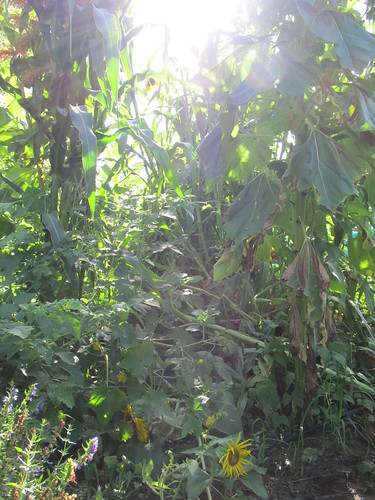 best recent comment on the garden: "it's so Alice in Wonderland." it really is. the corn is 12' tall, the sunflowers even taller, beans to the top of both and interwoven crazily everywhere in a wild maze of spiderwebs, hanging cucumbers, bean flowers and deep heart-shaped leaves.

sunday we had a work party, and for the first time this calendar year, we worked on building the wall. rebuilding, specifically, the stretch out front near the gate. we have two other sections to rebuild, and we got about halfway through that section in one awesomely productive day, with very close attention to the wisdom of the plumb bob through the whole proces this time. the damn thing is *straight* and it will stand. one more long day on that part and we'll be ready to plaster it and move on to the stretch behind the compost. 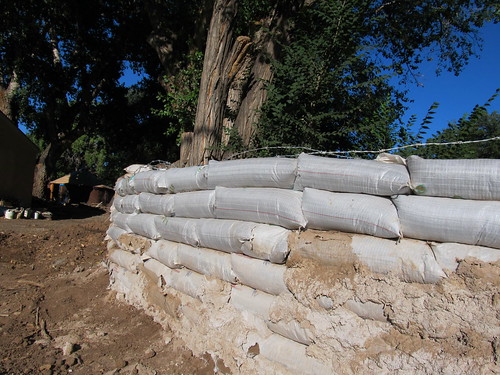 so now i'm sunburned and sore and it's the end of the second first day of school (it being university, we get two first days, the MW set and the TTh set).

other work that has happened recently on the wall has focused on getting a scratch coat of plaster onto the east wall. the first coat is now 100% in place, and we are starting the next coat. the mailbox got finished on one side, too: 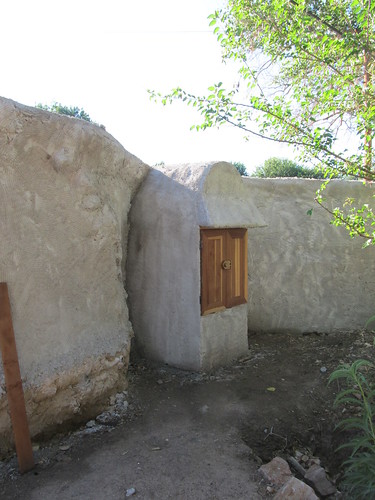 the plaster will be brown when we're done, but it gets another coat of this cementy stuff first, then a limewash, then a final colored limewash that will turn it brown.


it has rained a couple times, so we are up to 1.5 inches for the year. :-P still, it's a lot better than nothing.

and i really love the light this time of year. 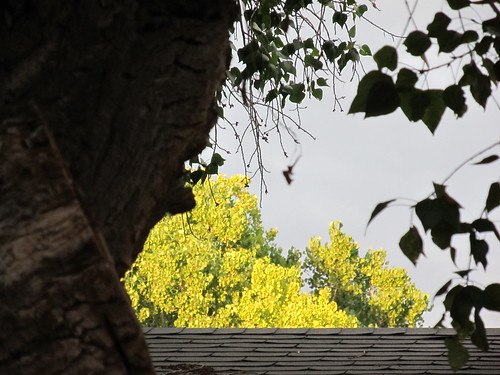 we got the new cover onto Alan's yurt, which also included insulating it. next step, finishing his chimney installation on the inside (the outside part is fine). then we're actually done with the structural work on that yurt. 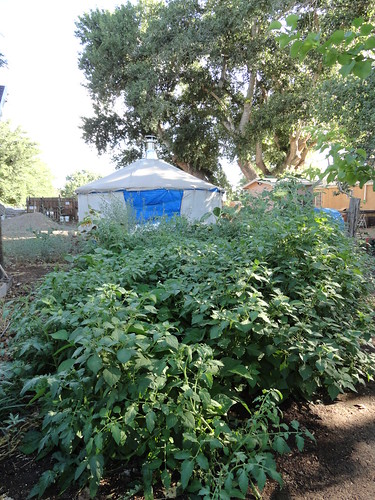 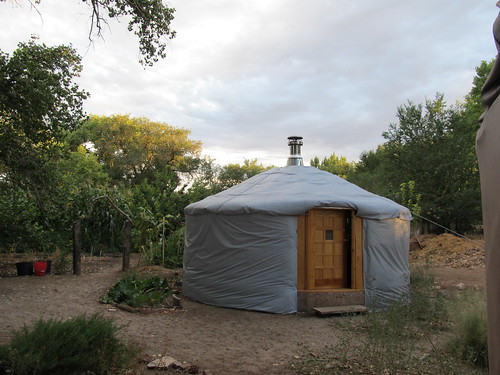 and we trapped our resident feral cat, who lives in Mr Hill's garage, and had her spayed. she has had 3 litters that i know of in the 4 years we've been here, maybe more, and they all seem to come to an assortment of bad ends. but she's still alive, fast and smart and canny. she has been mousing in our barn. i am trying to encourage that.

we took her to Animal Humane for their awesome Trap-Neuter-Release program for feral cats. here she is as we released her the next day. 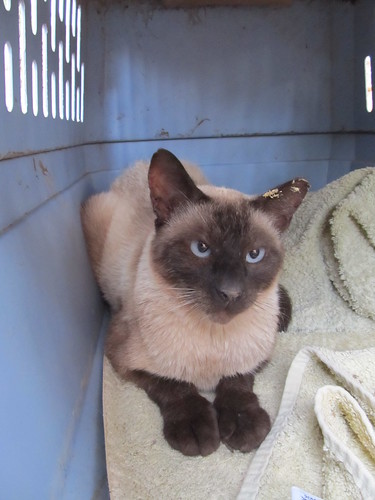 isn't she lovely? i kind of want to domesticate her. but of course, she's scarcer than ever now that we trapped her, and it will take some time to win her trust back. and meanwhile, changes at Mr Hill's house are almost certainly not helping.


we came home last week to find a car with Colorado plates out front of Mr Hill's house, and his back door open and security lights on. Very unusual. this is our very elderly neighbor, 94 years old, just south of us, whose pasture borders our barnyard. we have been interested in buying that property since we bought Sunflower River. Seeing the activity, we assumed he had passed away and his niece, who lives in Denver, was down to clean the place out. so i shed my halter and broomstick skirt and put on a tanktop and a pair of cutoffs so i would look like a dirty farmer instead of a dirty hippy, and went over there to make a good impression on her while sympathetically extracting as much information as i humanly could.

Mr Hill has not yet passed away, but is in the hospital. Linda, the niece, drove down when the folks at Abuelita's called her because they had not seen him for his daily meal in several days. It says something that the restaurant had his next-of-kin's phone number. so she came down and found him at home, not eating, devoid of energy. she took him to the hospital, where he is resting--dehydration, congentital heart failure. he's still not eating. Linda said she didn't know if he would be coming home again or not. s he said, this has happened a few times in the last few years, so she just didn't know; he might rally. but her mother, his sister, died last spring, and then his little dog died this past fall, and he naturally folds in on himself more each time he loses part of the little that is left to him. Linda is his only living relative.

She asked us to pray for his highest good, and i said we would. then i said, you know, we have some interest in this property. and she said, "oh, good! i was hoping you did. i wanted to come over and talk to you but i didn't know where the gate is." i told her how to get in, and we exchanged contact information. she will let us know when she leaves town, or if there is a significant update one direction or the other. she said, "we like to live by the k.i.s.s. principle" and apparently, selling the property as-is to the next-door neighbors qualifies. she was very amenable to the idea; she does not want to uproot her well-established life, she works full time and doesn't want to be down here a bunch dealing with all the things involved in fixing it up for sale and then the sale itself. we are now strategizing amongst ourselves about payment strategies.

it's simultaneously upsetting and exciting. i have wanted the extra house for four years, and we seem to be on the brink of being able to get it. it would jump my potting shed forward; i could use that house's barn. Linda didn't want to show me the place ("it's a mess, and if he comes home, he'll be embarrassed that you saw the house this way; let's wait.") but she said, "you know, this is a pretty big place" and said it's a 3-bedroom. and it's got that great pasture out back. we figure it for about 1/2 or 2/3 of an acre; it goes back as far as the ditch. the pasture is convenient to the ditch, and we could flood irrigate it. i am already fantasizing about turning one of the bedrooms into an office/craft room for everybody.

and, buying a house is a big stressful thing, and it's a lot of change fast, and it's a financial burden, and we just had a baby. ack! i am simultaneously concerned about the stress, and certain that we will do whatever needs to be done to manifest our goals.


and if i don't run, i'll miss my bus.
Tags: garden, mr hill's house, update, wall
Subscribe
Comments for this post were disabled by the author